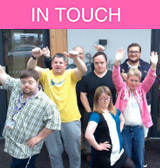 In Touch With Family and Supporters

After a hugely successful campaign—which began back in  2016— it is a great thrill to announce that we have finally reached the fundraising target for a much-needed new college building at Highlands Farm.

The Foley Centre, which will boast 4  flexible classrooms, a dedicated one-to-one study area and a specially designed interactive space, will be the home of our new and improved learning service—the MY LIFE Skills Academy.

At 144 square meters, the new facility is three times the size of our existing college—a small temporary structure with only two tiny teaching areas and a single toilet cubicle.

The opportunity to develop the service in a purpose-built environment, far more suited to the needs of our students their tutors and our dedicated team of college volunteers, is an enormously exciting prospect. But we couldn’t have done it without help.

A Leap of Faith

Over a coffee one wintry afternoon, I shared the Trust’s hopes for a new learning centre with John Foley, brother of COT tenant Robert. I explained that the Trust had been aware of the need for the project for many years, but it was a daunting prospect, requiring significant investment and with no guarantee of planning permission on the Highlands Farm site. 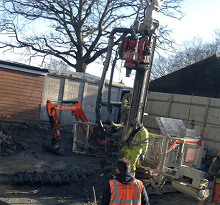 Even to get the idea to the planning permission stage would require a significant commitment to professional fees  - a real worry with so many other strategic priorities competing for funds.  Thankfully for Canterbury Oast Trust, John took a huge leap of faith that day and made the lead donation that began our fundraising journey.  When the total project cost increased due to rapidly rising materials prices, John and his wife Dina made a second donation to ensure the building works could begin.

We are delighted to name our new building ‘The Foley Centre’ in recognition of that incredible faith and commitment—evident from start to finish.

With the lead donation in place and planning permission secured, we were able to reach out to a wide range of grant-giving trusts, foundations and community organisations for help with the build cost.  As we hoped, the concept of the Skills Academy certainly proved inspiring and we were soon bowled over by the enormous generosity of the people we approached.  We are indebted to the following organisations and individuals who have helped to make our vision a reality:

Every single gift to the project is enormously significant, of course, but there have been some particular highlights during the fundraising campaign.

The public vote for The Masonic Charitable Foundation gift (as part of Freemasonry’s 300th Anniversary celebrations) was really exciting and we were grateful to receive the highest number of votes in the South East.  Every COT friend and supporter who took the time to vote can be proud of the part they played in our success.

Securing the highest donation ever awarded by the Cantiacorum Foundation (for charities in Kent and Medway) was also humbling, especially  in light of the many very worthy causes they support across the county.

Having played such a vital role in the 33-year history of COT, it was wonderful to receive a significant donation to the Academy from the dedicated volunteers at Hitrade.  What better way for them to embark upon their second million-pound target?

The Civil Service Insurance Society Charity Fund made a grant to the project in the early stages of the campaign and invited COT to make a second request, if necessary, to help complete the project.  They proved good to their word, and receiving a second cheque almost one year after the first was certainly a memorable event.

As we know, however, a fundraising campaign is very much a group effort and so we are indebted to each and every donor for every pound they have gifted towards this incredibly important project.   On behalf of the many service users who will benefit - now and into the future - we thank you; one and all.

Russell Walters - Chairman of the Board

The Board of Trustees is preparing for the departure of some familiar faces later this year.   Each COT Trustee may serve a maximum of three terms of three years (although, to ensure continuity of knowledge, it was agreed that Trustees who were serving at the date of the 2013 AGM - when this limit was introduced - would be eligible to serve for one further term of three years if they had already served for over nine years).  For that reason, Elizabeth Emson (former Chair) and Peter Ergis (Company Secretary) will be stepping down from their Trustee roles at the AGM in October.  Although we will express our formal thanks for their efforts nearer the time, we are already thinking about how to fill the significant holes they will leave.

We have also identified some other key areas that we would like to address and are therefore currently seeking new Trustees who may be suitable for the Company Secretary role, or those with skills and experience in Finance, Tourism and Care.  In particular for Care specialists, a knowledge of local authority commissioning would be especially valuable.

As you may have gathered from this edition of In Touch, the role of a Trustee at Canterbury Oast Trust is a busy but enormously rewarding one.   If you feel that you could make a positive contribution to our work and have the time and energy to commit to the role, we would be very glad to hear from you.  Please contact Jane Kirkham, Executive Assistant to the Chairman & CEO on 01233 861493 (extn 253) or email [email protected] in the first instance.

The volunteer gardening group have been busy over the past 6 weeks and have taken up the challenge after we received the funding kindly awarded to us by Tesco earlier this year. With that work has started at the New Bungalow and Homelands to bring back to life the borders and footpaths around the homes. 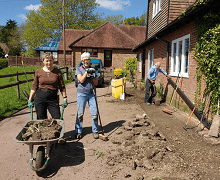 The pictures include some of the gardening group volunteers and Sammy at work tiding up the borders at Homelands, making ready for the new planters to arrive and putting the old footpath back into use at the Bungalow. 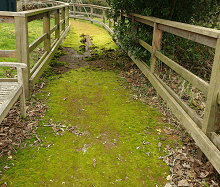 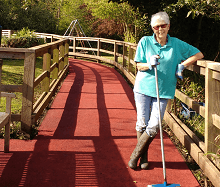 Also a note for your diary:

The Volunteers’ Lunch this year will be held on Sunday the 2nd September at Highlands Farm in the Falcons Centre. Invites will go out nearer the time.

Learning and Development would like to say welcome to all of the new staff across COT who have joined and undertaken their Induction programme.  We look forward to working with you all in the future.

We would also like to say a very big well done to our new care staff who have undertaken and completed the care certificate so far in 2018. They all worked very hard to complete the certificate alongside their service induction;

This is the start of their journey at COT and lays the foundations for the knowledge and skills they need to carry out their roles.

By the time you read this the Carvery Lunch booked for Sunday 1st July may well be over, or at least the deadline for bookings will be past. We needed 60 guests in order to hold this as a private function and so, remembering that we welcomed 53 people to our last lunch party, we gently crossed our fingers and booked the room. As I write, we have 77 bookings so this should be a truly happy occasion with lots of laughter and a decent amount of money raised for us to spend on COT’s residents and tenants. This time Friends decided to subsidise the cost of the meal, meaning that our guests get a 3 course meal with coffee for just £16.95 and, if all goes to plan, we should raise £1,155 plus the proceeds of the raffle. In case you wonder how this works , the London Beach Hotel, where we enjoy our lunches, has a charitable Trust and when you make a group booking  they donate the cost of your meal to your chosen charity. We’ve held 3 lunches so far and we’re considering the option of an Afternoon Tea in the future; I’d love to hear if you’d be interested in that.

In May we organised a Fashion Show in Hamstreet, run by Travelling Trends. They bring rails and rails of current season clothes, many from well-known High Street names such as M&S, Country Casuals, Next etc, which are on sale at heavily discounted prices. They also bring two of their own models but we had to supply another 2 or 3 for the show. No problem, plenty of offers! Alas, by the day of the show two models had to drop out, both for excellent and forgivable reasons, which left Sandra Bieri and myself plus a lovely young friend of Anne Squires to brave the catwalk (not to mention the stripping off to change outfits). The audience was disappointingly small but we raised around £260 for COT and bought some lovely clothes at bargain prices, too.

The Zumba classes have re-started after a forced holiday, firstly when the room was being altered and then when the leader fell ill. I’m sure everyone will be very happy to return to moving and shaking to music. Another visit from SG Productions took place on 8th June , when everyone was invited to ‘Twist and Shout’. If past evenings are anything to go by there was plenty of both! The Summer Sports Day takes place on Sunday 5th August, details will be soon be sent to all the houses, and the next It’s a Knockout, organised with Ashford Lions, is on October 14th - to be confirmed.

The next Tombola will take place at the Classic Car Rally on 17th June – we had to cancel the Easter Monday tombola when the weather forecast was pretty dire. In fact it wasn’t as bad as expected but decisions have to be made in advance nonetheless.

We’ve been donated £200 by Tenterden Lions towards a Music Day and we’re busy putting together some ideas for a day in the autumn with plenty of participation as well as lots of musical fun. A big thank you to The Lions for helping our residents/tenants in this way. 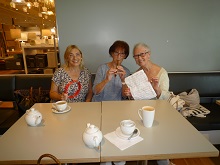 Silcocks Farm Shop, St Michaels near Tenterden, have come up trumps yet again with a donation of £122.34, mostly raised from offering books for a donation but also from a competition at their Spring Farm Day. Not only do I offer them our gratitude for their continuing support but I also have no hesitation in recommending them as a source of meat, cheese, tarts and puddings. Top quality, organic, rare breed and delicious.

Apart from the activities organised by Friends, we’ve been able to support many social times for residents and tenants, from holidays to days out. Once again, we need to emphasise how hard it is to continue to raise money for Friends when there are so few active members – that’s not to say how much we appreciate all your support given through tombola prizes and attending our events, because we certainly do. A few more offers of help at those events would be wonderful, too, not to mention some new ideas, and regular donations are always gratefully accepted.

Future dates for your diaries :  Saturday 17th & Sunday 18th November Christmas Gift Market. We need items to sell for this, please, whether crafts, decorations or otherwise AND we’ll need lots of prizes for the big tombola, which always raises such a lot for Friends.  Saturday 8th December, Christmas Concert given by the Kent Police Male Voice Choir. This year the concert will be held in St Dunstan’s, Cranbrook, a large and beautiful church. I really need to hear from anyone who knows the town or the church as I’ll be starting my publicity campaign from a position of unfamiliarity – and we need sell 200 tickets at least. If you can give me any advice or have any useful contacts, please let me know !